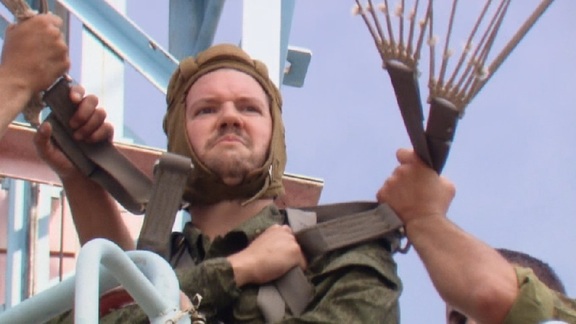 James Brown signs up to become a paratrooper and is sent to boot camp. All Russian men are required to do a year of army service and the paratroopers are the best of the best. He's based in Tula; it's just a few hours' drive from Moscow, but a completely different world. What's it like getting ordered around and sleeping in a room with dozens of bunk beds? Is there any truth to the Russian expression that something "stinks like a barracks?" What is the daily routine of new soldiers? Who are his new comrades and what kinds of backgrounds are they from? What does it take to maintain an AK-74 assault rifle? Marching practice is a must; "Private Brown" spends hours drilling and trying to get it right. He participates in live fire exercises and finds out he's a good shot, but in addition to firing an assault rifle, he must be able to use a grenade launcher. The troops have to practice for two weeks before their first parachute jump. This includes an underwater training session; Private Brown puts on scuba gear and is taught the basics of underwater fighting. James is sent to the top of a forty-metre tower and told to jump off; will he be able to overcome his fear of heights and take the plunge? Finally, the day arrives when the troops take the pledge of allegiance and join the paratroopers.