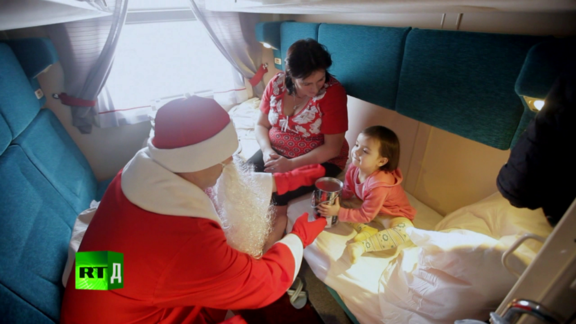 It's day two of the journey and the train is already in Tyumen, in Western Siberia. It's New Year's Eve, the biggest holiday of the year in Russia. However, the crew must deal with a potential emergency when the coal they use to heat the train doesn't arrive. The chief conductor and Tyumen's station master quarrel over the coal shortage; how will the staff manage to heat the passengers despite an outside temperature of minus 30? Next, it's time for the conductors to play Santa and give the children traditional New Year's presents, but Russia's "Father Frost" isn't an exact replica of Jolly Old Saint Nick. Afterwards, the conductors celebrate their own New Year festivities, but not before attempting to fix a problem with the train's undercarriage with a crowbar. The conductors confront a foreign traveller who has thrown up all over the bathroom and refuses to clean it up. Finally, the conductors gather to drink tea and greet the New Year by daring each other to do silly things.