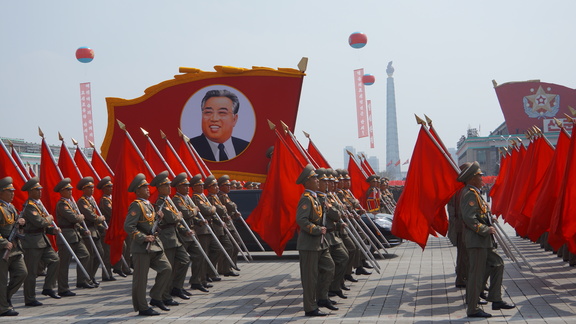 The parade celebrating 105 years since Kim Il Sung’s birth is the most large-scale of late. It was the first parade to feature new types of troops - special tactical units. They are North Korean special forces whose business is to combat foreign infiltrators. The soldiers are equipped with new grenade launchers. In front of a hundred foreign journalists, new ballistic missiles able to carry nuclear weapons were paraded across Kim Il Sung Square. The main novelty and pride first shown to the public are the Pukkuksong-2 missiles, which can be launched from submarines. The Democratic People's Republic of Korea has announced it will continue development in this field. Soon, North Korean missiles will be able to reach the USA’s western coast.

1 Details
2020
HD
Available in Russian, with English subtitles,
in Spanish and Arabic languages